Pay Attention to the Signs II 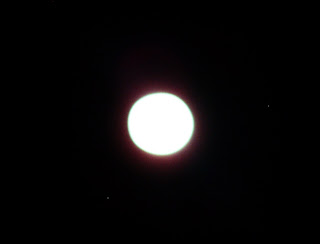 "And there shall be signs in the sun, and in the moon, and in the stars; and upon the earth the distress of nations, with great perplexity, over the sea and the roaring of the waves."  ~ Luke 21:25

Jesus warned his apostles about the signs that would signal his impending return.  The apostles mistakenly thought He would return in their lifetime. Centuries of Christians have seen or experienced tragedies that made them sure His return was nigh.  Jesus allows this so we can live in faith, not worrying about tomorrow's inconsequential matters.

It seems that in the past year, the number of natural disasters, political upheaval, and unusual weather patterns have been unprecedented. When reading the "reader comments" sections of online newspaper articles about these occurrences, every third or fourth comment makes some sort of reference to the end of time, or the end of the age, or the impending return of the messiah.  Many of those making those comments present it in a mocking way, but it's interesting to note that they realized the concern enough to remark upon it at all.

The occurrences over the past few months are as follows, in no particular order:
Most recently, Japan experienced a horrific 8.9 magnitude earthquake followed by large aftershocks, causing the island Japan to shift eight feet east and the axis of the earth to move 25 centimeters (10 inches). At present the Japanese are working feverishly to avert nuclear disaster as at least four of their nuclear power plants are in danger of melting down. A volcano on the south end of the island is threatening to erupt. Scores of people have been hurt, an unknown number have been killed, with many still unaccounted for.

Our Holy Mother often appears in places where there is soon to be some sort of cataclysm. In 1973 she spoke to a nun in Akita, Japan, warning of impending calamities if people did not change their ways. Pope Benedict, then Cardinal Ratzinger, stated that the approved messages of Akita and the Third Secret of Fatima were essentially the same message, " . . . fire will fall from the sky and wipe out a great part of humanity . . ." http://allformary.org/our-lady-of-akita/

At Fatima our Holy Mother vehemently requested that we pray the rosary every day and receive Jesus in the Blessed Sacrament as often as possible. She also spoke about making a good confession in that great and necessary Sacrament of Reconciliation.  Praying the rosary daily with devout meditation upon each mystery will open hearts and minds to God's truth.

In the U.S., The Catholic Church is being indirectly mocked by the government. Many Catholics in name only have been appointed into high positions. These supposed Catholics support abortion rights; the modern day slaughter of the innocents. Satan is the father of confusion. His time is short and he is attacking the church with a vengeance from the highest possible positions.

We take hope in those glorious words of our Holy Mother at Fatima, "In the end, my Immaculate Heart will triumph."

Pray the rosary for peoples' hearts and minds to be enlightened with His truth!
Posted by Lovey at 11:16 PM 4 comments: