Visions Approved For Faith Expression: Our Lady of Belpasso, Italy

"When Mary speaks of the rosary, and recommends it as a very efficacious prayer, she hands it forward, and then she lifts it a little. Interpretation: She seems to present the rosary as an anchor of salvation, or as a powerful means to relieve the souls of everyday problems, or to raise them to the supernatural realities, or as a chain of love which ties men to God." 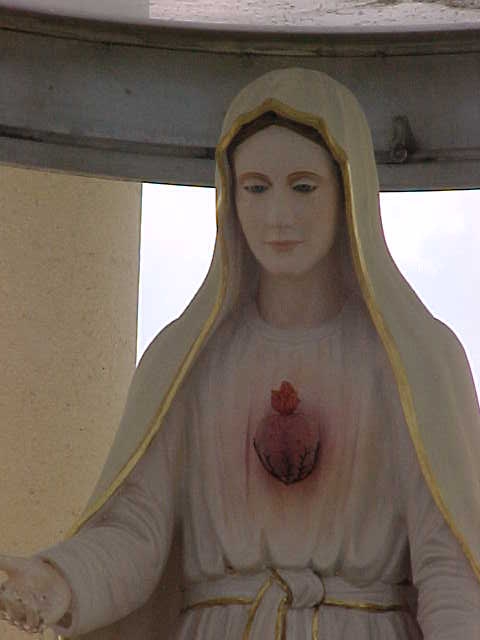 These are the words of a humble man named Rosario Toscano in Belpasso, Italy. He is describing the Blessed Virgin Mary as she appeared to him during visions that began on May 11, 1986 when he was fifteen years old, and occurred thirty two times more until May 1, 1988. Mary has promised him a thirty third vision for an unspecified future date. The messages bear many similarities to the Fatima apparitions, including the Blessed Virgin holding out her hands to cause the ground to open up, allowing the seer a vision of the abyss of hell.

Like Fatima, a series of secrets were revealed. On March 1, 1987, the Blessed Virgin revealed twelve secrets to Rosario. Two of them are personal messages for Rosario, and ten are for mankind. Of these secrets, Rosario has stated (translated from Italian), "Many have asked themselves whether these disagreeable events are to be very sorrowful. Just know that I cried for weeks, and maybe I wouldn't have peace anymore if the heart of our Mother hadn't consoled me and the Grace of our Lord hadn't assisted me."

The secrets involve two major time frames; the time of mercy and the time of justice. Although it seems God has set a plan for the events, Rosario has stated that, through prayer and penance, they may be mitigated (lessened). According to him, "God gives men the capacity to purify themselves through a life of penance, sacrifice, fasting, and especially recourse to sacraments and prayer." Rosario is to give his Bishop a warning in writing of each secret in advance of their occurring. Mary has requested from us, "Prayer, reparation, penitence."

The Archbishop of Catania, His Excellency Luigi Bonmarito, has referred to Rosario as, "The clean boy of Belpasso." ("Jesus" magazine, 1989). In an interview,  the Bishop has also spoken about the humility of Rosario, and how his desire was for people to seek out the Holy Mother and not himself. It gave him joy when people went to the apparition site to speak to Mary, and not seek him out.

On May 1, 2000 the Archbishop has blessed the statue of "Our Lady of the Belpasso Rock" and has consecrated the chapel built as a Marian sanctuary, attaching to it the Jubilee indulgence. Thousands of pilgrims visit the shrine, especially on the first of each month when they pray the rosary, priests hear confessions, and then all participate in the Holy Mass. This apparition site has been approved by the Bishop for faith expression.

To read more about Rosario's beautiful description of our Holy Mother and her urgent messages for our time, Click Here: The Apparitions of the Virgin Mary at Belpasso, Italy

Maria Divine Mercy, Schism! A Deception of Satan (With link to an audioinverview of the seer) The Maria Divine Mercy messages are fomenting SCHISM and they are a deception of Satan! The messages started in 2010, and I discovered them on the Internet early in 2012. Being unsure of the messages coupled with my love of the Holy Catholic Church, I began a long journey of discovery through prayer, reading and listening especially to clergy and theologians, and comparing messages to Catholic doctrine. The list below continues to grow as I have bullet pointed solid arguments against the truth of these messages below.


OFFICIAL WORD ON MARIA DIVINE MERCY BY THE ARCHBISHOP OF DUBLIN under whose jurisdiction Maria Divine Mercy resides:

The Archbishop of Dublin has spoken out that the MDM messages are to be avoided by Catholics.  Her messages are officially condemned!

Archbishop Diarmuid Martin wishes to state that these messages and alleged visions have no ecclesiastical approval and many of the texts are in contradiction with Catholic theology.

These messages should not be promoted or made use of within Catholic Church associations.

The source:  Click here: Statement against MDM by the Archbishop of Dublin

Opinions of other bishops, priests, and theologians:
2011 audio interview of "Maria Divine Mercy". Thank you to my sister-in-law for finding this: Radio Interview with "seer" Maria Divine Mercy


There are many references from approved seers throughout history about being cautious of anything that attempts to make Catholics turn away from the Catholic Church. For example, here are the words of the amazing seer Hildegard regarding the Minor Chastisement, "After the birth of Antichrist heretics will preach their false doctrines undisturbed, resulting in Christians having doubts about their holy Catholic faith...at that period when antichrist shall be born, there will be many wars and right order shall be destroyed on earth. Heresy will be rampant and the heretics will preach their errors openly without restraint. Even among Christians doubt and scepticism will be entertained concerning the beliefs of Catholicism."

Jesus warned us that in these days there would be numerous false prophets, some so clever as to deceive even the elect. One thing is certain, it doesn't hurt us to ignore private revelations altogether, and instead immerse ourselves in the truth of the Gospel and the rich teachings of the Church. If we follow the blueprint Jesus laid out for us before He ascended into heaven, we have no need of further "revelations".

We should try not to chase butterflies in the tangled forest while neglecting the beautiful ones we already have in our own gardens! And while you're there....Plant a rosary every day!

Stop chasing apparitions and embrace the profundity of the mundane!