CARLO ACUTIS: TEENAGE CANDIDATE FOR BEATIFICATION, DEVOTED TO THE EUCHARIST AND THE ROSARY

Who is Carlos Acutis? An amazing teenager who displayed such extraordinary faith That his cause for beatification is presently in progress. The article below, translated from Italian by the publishers of the website for his cause of beatification, outlines the life and devotion of young Carlo Acutis, an example of faith for teenagers all over the world.

The author of this article, editor-in-chief of Vatican Radio, has personally known Carlo,
having been a friend of his family for years. 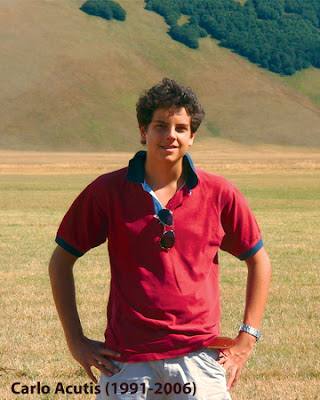 "A fifteen-year-old 'witness of our time' deeply devoted to Our Lady of Pompeii
by Giovanni Peduto (Il Rosario e la Nuova Pompei Year 25 No. 5, September-October 2008)

"Among the millions of devotees that Our Lady of Pompeii boasts, the young Milanese Carlo Acutis deserves to be mentioned. He died at the age of 15, on October 11, 2006, because of a fulminant leukaemia, and in the Archdiocese of Milan has already been started the path for the opening of the Cause of Beatification.

"He is remembered by those who knew him for the enthusiasm with which he conveyed to others his love for God and the neighbour. At seven he did his First Communion and since then, every day, he has never missed the daily appointment with the Holy Mass, the Eucharistic Adoration and the Holy Rosary. The focus of Carlo’s spirituality was the daily encounter with the Lord in the Eucharist: he said It 'was Jesus truly present in the world, as at the time of the Apostles the disciples could see him in flesh and bones walking on the streets of Jerusalem'. Carlo often repeated: 'The Eucharist is my highway to Heaven!' This is the summary of his spirituality and the core of his whole existence spent in friendship with God.

"Carlo was very fond of the Virgin of Pompeii, where he came dozens of times, accompanied by his parents, and where each time he renewed his act of consecration to Mary. He used to say: 'The Madonna is the only woman of my life!', and he never missed 'the most loving appointment of the day', which was for him the prayer of the Holy Rosary.

"Some days before Carlo was led to the hospital, when no one suspected that he had leukaemia which in a few days brought him to the grave, he told his parents: 'I offer all the suffering I will have to suffer to the Lord, for the Pope and the Church, for not to do Purgatory and go straight into Heaven'. The heroism with which he dealt with his illness and death convinced many people that really there was something special in him. When the doctor who followed him asked him if he suffered a lot, Carlo replied: 'There are people who suffer much more than me'.

"A continuous pilgrimage held a wake for his body. His funeral was attended by a crowd so immense that many were forced to remain outside the Church. The continuing testimonies, letters, stories, which still today arrive at the postulator of the Cause of Beatification, Dr. Francesca Consolini, appointed by the Curia of Milan, tell of an extraordinary young boy, blessed by grace, so much that the Archdiocese of Milan thought to propose him as a model for the young and to start the process in view of the introduction of the Cause of Beatification which, as you know, may begin 5 years after death. It results, in fact, that so many are those who ask the intercession and the aid of Carlo.

"From the testimonies collected a few days after his death, one discovers that Carlo was completely dedicated to the welfare of the people he met. He helped everyone: non-Community immigrants, beggars, disabled persons, elderly people, children. He was worried about his friends whose parents were divorcing and invited them to his house to support them; in the classroom he always took the defences of those who had more difficulty to integrate. On more than one occasion he defended the disabled that were taken around by frivolous boys.

"With great courage he defended the Christian values, even if this sometimes caused him misunderstandings. His professor of religion at the high school recalls that in a discussion in the classroom Carlo was the only one to oppose abortion.

"He had a great view of all persons and was concerned about how many wasted the talents that God had given them. On more than one occasion he affirmed: 'All are born with their own originality, but many die as photocopies'.

"This intense spirituality did not prevent him from having a normal life, common to that of his peers. Everybody remained amazed by his ability to understand the secrets that informatics hides and which are normally accessible only to those who have completed specialized university studies. Carlo’s interests ranged from computer programming to the assembly of films, the creation of websites, comics, of which he also cured the drafting and layout."


"Nicola Gori, editor of the 'L’Osservatore Romano', has published the biography of Carlo Acutis in the book 'Eucaristia - la mia autostrada per il cielo' (The Eucharist - my highway to heaven) (Edizioni San Paolo, 160 pp., 14 euros). The volume bearing the foreword by Father Michelangelo M. Tiribilli, OSB, Abbot General of the Benedictines of Monte Oliveto, is published in the series 'Witnesses of our time'. Sold out in a few weeks, it is already at its fourth reprint."

The website Carlo built during his life to guide others in their faith life: www.Carloacutis.com
His work has been left intact except for page additions by those who loved him.

These are some maxims presented on the site by Carlo who "decided to help them by sharing some of my most special secrets for those who wish to quickly achieve the goal of holiness:

1) You must want it with all your heart, and if this desire has not arisen in his heart, must ask with insistence to the Lord.
2) Go to Mass every day and take Holy Communion.
3) Remember to pray the Rosary every day.
4) Read every day a passage of Holy Scripture.
5) If you can make a moment of Eucharistic adoration before the altar where Jesus is truly present, you see how wonderfully you can increase your level of holiness.
7) Go to confession every week, even the sins that are frivolous.
8) Make requests and offer flowers to the Lord and Our Lady, to help others.
9) Ask your guardian angel to help you continually, so that it becomes your best friend"

The Diocese of Milan has begun the collection of testimonies from people who say they have received various types of grace through Carlo.

References:
Carlo's Website www.carloacutis.com/
Carlo Acutis: A Young "Anti-Conformist" by Sonia Andreoli
Carlos Acutis - A Saint for Today's Teens, blog, "Is Anybody There?"
University Library, Italy
Santuario di Loreto
The Catholic Miscellany
The Real Presence, Vatican Tour of Eucharistic Miracles of the World
Posted by Lovey at 5:10 AM