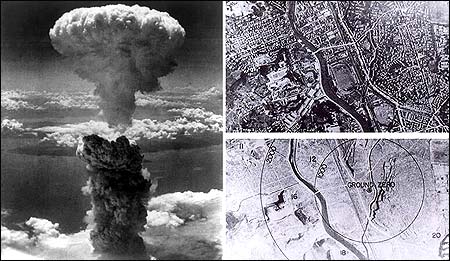 On August 6, 1945 during World War II, an atomic bomb was dropped on the town of Hiroshima, Japan. 140,000 people were killed or injured. There was a home eight blocks (about 1 kilometer) from where the A-Bomb went off . This home had a church attached to it which was completely destroyed, but the home survived, and so did the eight German Jesuit missionaries who prayed the rosary in that house faithfully every day. These men were missionaries to the Japanese people, they were non-military, but because Germany and Japan were allies during WWII they were permitted to live and minister within Japan during the war. 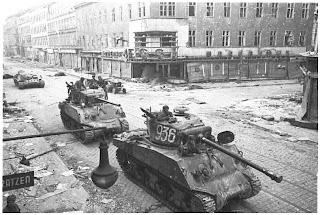 For three years, Catholic Austria went under the tyrannical rule of communist Russia after World War II. A  Franciscan priest named Father Petrus remembered the story of how Christians in the sixteenth century had defeated the Turks at the Battle of Lepanto through the rosary, despite being greatly outnumbered. Father Petrus launched a rosary crusade and 70,000 people pledged to say the rosary daily for the intention of Austria becoming free from Russian rule. Although Austria was valuable to the Soviets because of its strategic location and rich resources, on May 13, 1955, the anniversary of the first apparition of Our Lady at Fatima, the atheistic Russian regime, in a completely unprecedented move, signed the agreement to leave Austria. Not one person was killed, and not even one shot was fired.  Today, historians and Military strategists still cannot explain how or why the Russians pulled out of Austria.

Those devoted to the rosary of Our Holy Mother know exactly the reason. Pray the rosary for world peace!

The Rosary Defeats Muslim Forces in The Battle of Lepanto ~ 1571 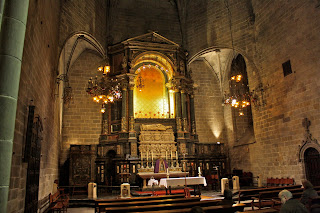 The chapel of Christ of Lepanto in The Cathedral of San Eulalia in Barcelona, Spain.
(Photos from http://jn1838.blogspot.com/2010/04/crucifix-of-lepanto.html) 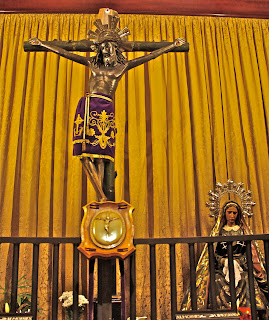 The crucifix from the ship of Don Juan of Austria in The Battle of Lepanto. The oncoming Moslem Turks shot a cannon at it and the Corpus miraculously swerved to the right, avoiding the shot, and stayed that way ever since. This treasure is venerated at The Cathedral of San Eulalia in Barcelona, Spain.

The Battle of Lepanto, October 7, 1571 ~ At the end of the Crusades, Catholic naval forces, in a battle with Muslim forces, were at a decided disadvantage in numbers and resources. Knowing the odds for victory were poor, St. Pope Pius V requested all of Europe to pray the rosary. While performing his duties in the Vatican miles away from battle, the good Pope is said to have suddenly stood up at the moment of victory, gone over to a window and exclaimed, "The Christian fleet is victorious!" while shedding tears of gratitude to God. Through the power of the rosary, the Catholic forces soundly defeated the Muslim Turks.  In another point of interest, Admiral Andrea Doria commanding the Catholic forces carried a small image of Our Lady of Guadalupe into battle. This image is now venerated in the Church of San Stefano in Aveto, Italy.

The Rosary Defeats a Philippino Dictatorship in 1986 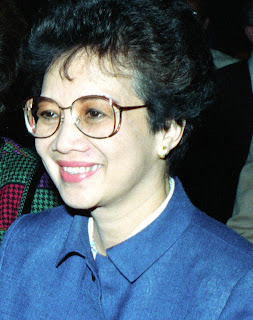 The citizens of the Philippines were poor and starving while President Marcos and his wife Imelda lived in lavish luxury. To this day people make jokes about Imelda Marcos’s shoes because she had 3000 pairs, along with 15 mink coats, 1000 purses, and 508 fancy gowns.  The people wanted to elect a new president, Benigno Aquino, nicknamed Ninoy. He was assassinated right in front of his wife and family as he stepped off a plane to run for office in Manila. After this brutal murder, Ninoy’s wife Corazon “Cory” Aquino became active in protests against the Marcos regime. The people clamored for Cory to run for President, and when they presented her with one million signatures urging her to do so, she fulfilled the people’s wishes. Marcos called a snap election day on February 7, 1986 which turned out to be a bloody, violent, and fraud-filled event. President Marcos, declared the winner by his corrupt government, took control of the media and sent out the military to quell any protests. Cardinal Sin of the Archdiocese of Manila urged a peaceful protest and the Catholic people came out in droves. They surrounded the military tanks and armed soldiers, prayed the rosary, and sang religious and protest songs.  Holy Masses and prayer vigils took place in churches. This prayerful protest continued for almost a week when unexpectedly, the soldiers stepped away from their tanks, put down their guns, and joined the peaceful crowd. President Marcos fled the country on February 26, 1986 and the whole nation took to the streets in celebration. Prayers of thanksgiving and holy masses were held in gratitude to God.  As the new President, Cory Aquino made sweeping changes and the Philippines became a free and democratic country. To this day people are in awe that the evil, corrupt regime of Marcos was completely overturned through peaceful means.

Pray the rosary unceasingly for a moral government, leaders with integrity, and an end to evil regimes!

Bartolo Longo was born in 1841 to a devout Catholic family. When Bartolo grew up he decided to study law. Naples at that time was undergoing a tremendous spiritual crisis. Paganism and Satanism of all sorts were abounding. Bartolo was not immune to these influences and became a satanic priest, much to the chagrin of his family who tried their hardest to get him to convert.


As Satanism began to torment his mind, his family convinced him to make a good confession. Alberto Radente, a saintly Dominican priest,  helped lead him back to the catholic faith and encouraged his devotion to the rosary. Bartolo had a miraculous conversion and In 1870, he became a third order Dominican and chose to live a life in penance for all the terrible sins he had committed against the church.


One day, he nearly succumbed to the sin of despair, feeling that God could never forgive the tremendous sins he had committed against the church.  At that moment he received divine inspiration and remembered The Blessed Virgin’s promise that she would help in all their necessities those who propagate her rosary.


He set out to restore the dilapidated chapel at Pompeii and promote the rosary to whoever would listen. Pamphlets about the rosary were distributed to help the people learn to pray this powerful devotion. He tried to find an image of Our Lady of the Rosary worthy of hanging in the chapel, but was only offered a worm-eaten painting with an image that he felt was coarse and not worthy of veneration, however he accepted it from the convent in which it was stored.


As Bartolo continued his work of propagating the rosary, the chapel’s membership grew tremendously and many miracles began to be associated with Our Lady of Pompeii. Cures and spiritual conversions occurred due to the devotions through this new shrine. The people pledged their support to have a large church built that would properly honor Our Lady of the Rosary.


In 1894, Bartolo and his wife gave the church over to the care of the Vatican. The original image found in the convent was restored for the last time in 1965 and Pope Paul VI crowned the heads of Jesus and Mary with diadems given by the people of Pompeii. On October 26, 1980, Bartolo Longo was beatified by John Paul II who called him 'the man of the Madonna' and the 'Apostle of the Rosary'.


Pray the rosary to receive Our Holy Mother's heavenly aid in saving souls!


The Rosary stops a serial killer 1978

At 3: 00 am on January 15 Bundy entered the Chi Omega sorority house at Florida State University and murdered two girls before heading off to search for more victims. When he entered a third girl’s room with a bat for a weapon, he saw a rosary clutched in her hand, dropped the bat and fled.

Later the girl told authorities that before she left for college she had promised her grandmother that she would pray the rosary every night for protection, even if she fell asleep in the process. This is what she had done that night, and she was still holding the rosary when the murderer entered her room. Bundy later confessed to over thirty murders.

Father Joseph M. Esper says in his book With Mary to Jesus, "Ironically, when Ted Bundy was on death row, awaiting execution for his crimes, he asked Monsignor Kerr to serve as a spiritual counselor, and the priest took the opportunity to ask about that terrible night.  Bundy explained that when he entered the girl's room, he had fully intended on murdering her; some mysterious power was preventing him."

Father Esper adds, "And not only does it (the rosary) aid our own spiritual growth -- it also undermines the kingdom of Satan. The famous Vatican exorcist Father Gabriele Amorth testified, 'One day a colleague of mine heard the devil say during an exorcism, "Every Hail Mary is like a blow on my head. If Christians knew how powerful the Rosary was, it would be my end."'

Pray the rosary daily for protection and to defeat the forces of Satan!

Inset Photo: To purchase the book, go to http://www.spiritdaily.com/books.htm 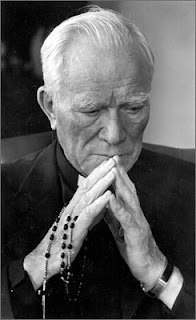 Fr Patrick Peyton was born on January 9,1909 in County Mayo, Ireland. He was the sixth among a family of nine children. At age 19 he and his brother, Tom, emigrated to the United States. He wanted to become a priest but his family in Ireland could not financially afford the required education.

He moved in with his sister Nellie and obtained a job working as a janitor at St. Stanislaus Cathedral in Pennsylvania. With help from Monsignor Paul Kelley, Patrick was able to pursue his schooling to become a priest. He entered the seminary at the Congregation of Holy Cross in Notre Dame, Indiana in 1932.

In October, 1938, he started coughing blood and doctors discovered he had advanced stages of Tuberculosis, which was incurable in those days. His sister Nellie encouraged him to ask our Holy Mother for help. Patrick consecrated himself completely to Mary and devoted himself to praying the rosary. The doctors discovered that the patches on his lungs had disappeared with no scientific explanation.  With this miraculous cure through the rosary of our Holy Mother, Father Peyton vowed to Mary that he would promote the rosary all his life. 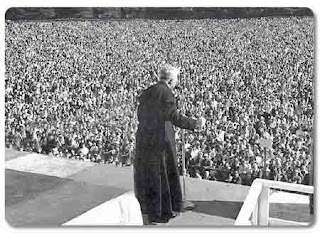 Father Peyton was one of the first evangelizers to use the electronic media to spread the word of God, in particular, that families pray the rosary together.  Father Peyton coined the phrase, "The family that prays together, stays together."

From The Secret of the Rosary by St. Louis de Montfort