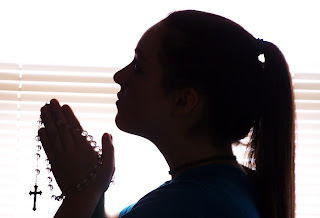 "On March 3, 1884, Our Lady of Pompeii appeared before the gravely ill daughter of an Italian military officer and, through her, gave the world a new devotion of tremendous power.
For over a year, Fortuna Agrelli had been in great distress and even near-death. Indeed, her case had been given up as hopeless by the most celebrated physicians. In desperation, on February 16, the afflicted girl and her family began a novena of Rosaries.
Two weeks later, the Queen of the Holy Rosary appeared before Fortuna one evening. Sitting upon a high throne, surrounded by luminous figures, Our Lady was holding the Divine Child on Her lap and a Rosary in Her hand. Both were arrayed in golden garments and were accompanied by Sts. Dominic and Catherine of Siena.
'Child, your faith has pleased Me.' Our Lady said to Fortuna, 'Whoever desires to obtain favors from Me should make three novenas in petition of the prayers of the Rosary, and three novenas in thanksgiving.'
Obedient to Our Lady’s command, Fortuna and her family completed the six novenas whereupon the young girl was restored to perfect health and her family showered with many blessings." ~ from www.fatima.org

How to Say the Miraculous 54 Day Rosary Novena
Petition: Five decades of the rosary each day for twenty-seven days.

Thanksgiving: Five decades each day for an additional twenty-seven days (whether or not the petition request has been granted).