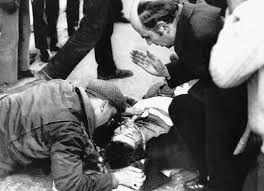 By Phil Lawler
Writing in the Wall Street Journal, Jennifer Graham tells me something that I hadn’t heard about Boston Marathon bombing. As dozens of victims were sprawled across Boylston Street, many of them in danger of death, Catholic priests came running to the scene—and were turned away.
Doctors and nurses were welcome at the bombing scene. Firefighters and police officers were welcome. But Catholic priests, who might have offered the solace of the sacraments, were not.

”Catholics need not apply.” That slogan was familiar in Boston years ago, before Irish and Italian immigrants took over control of the city. Now, after decades of decline in Catholic influence , the attitude has returned. One priest who was barred from Boylston Street remarked that in the past a priest was admitted anywhere. “That’s changed,” he said. “Priests are no longer considered to be emergency responders.”

Unless police officers in Boston are uniquely hostile to priests (a distinct possibility), the tide has turned very quickly on this question. On September 11, 2001, there were Catholic priests at the staging areas near the World Trade Center, giving absolution to firefighters before they rushed into the doomed building: mass-producing saints!

Unable to provide spiritual help to those whose lives were endangered, the priests in Boston retreated to a nearby church, were they “set up a table with water and oranges and bananas to serve people.” Doesn’t that nicely capture what a once-Catholic, now-secular culture expects from the Church? It’s not essential for priests to administer the sacraments; in fact it’s unwelcome. But if they could just stay out of the way, and give people something to eat, that would be fine.


But it is a poignant irony that Martin Richard, the 8-year-old boy who died on Boylston Street, was a Catholic who had received his first Communion just last year. As Martin lay dying, priests were only yards away, beyond the police tape, unable to reach him to administer last rites…


Source: Catholic Culture
Posted by Lovey at 1:52 AM No comments:

Abortion HORROR! What the Mainstream News is HIDING!!!

We've forgotten what belongs on Page One.


Infant beheadings. Severed baby feet in jars. A child screaming after it was delivered alive during an abortion procedure. Haven't heard about these sickening accusations?

It's not your fault. Since the murder trial of Pennsylvania abortion doctor Kermit Gosnell began March 18, there has been precious little coverage of the case that should be on every news show and front page. The revolting revelations of Gosnell's former staff, who have been testifying to what they witnessed and did during late-term abortions, should shock anyone with a heart.

NBC-10 Philadelphia reported that, Stephen Massof, a former Gosnell worker, "described how he snipped the spinal cords of babies, calling it, 'literally a beheading. It is separating the brain from the body." One former worker, Adrienne Moton, testified that Gosnell taught her his "snipping" technique to use on infants born alive.

Massof, who, like other witnesses, has himself pleaded guilty to serious crimes, testified "It would rain fetuses. Fetuses and blood all over the place." Here is the headline the Associated Press put on a story about his testimony that he saw 100 babies born and then snipped: "Staffer describes chaos at PA abortion clinic."

"Chaos" isn't really the story here. Butchering babies that were already born and were older than the state's 24-week limit for abortions is the story. There is a reason the late Democratic senator Daniel Patrick Moynihan called this procedure infanticide.

Regardless of such quibbles, about whether Gosnell was killing the infants one second after they left the womb instead of partially inside or completely inside the womb — as in a routine late-term abortion — is merely a matter of geography. That one is murder and the other is a legal procedure is morally irreconcilable.

A Lexis-Nexis search shows none of the news shows on the three major national television networks has mentioned the Gosnell trial in the last three months. The exception is when Wall Street Journal columnist Peggy Noonan hijacked a segment on Meet the Press meant to foment outrage over an anti-abortion rights law in some backward red state.

The Washington Post has not published original reporting on this during the trial and The New York Times saw fit to run one original story on A-17 on the trial's first day. They've been silent ever since, despite headline-worthy testimony.

OUR VIEW: If Plan B goes OTC, common sense suffers
OPPOSING VIEW: 'Plan B' contraception ruling correct
COLUMN: No woman should have to wait for Plan B

Let me state the obvious. This should be front page news. When Rush Limbaugh attacked Sandra Fluke, there was non-stop media hysteria. The venerable NBC Nightly News' Brian Williams intoned, "A firestorm of outrage from women after a crude tirade from Rush Limbaugh," as he teased a segment on the brouhaha. Yet, accusations of babies having their heads severed — a major human rights story if there ever was one — doesn't make the cut.

You don't have to oppose abortion rights to find late-term abortion abhorrent or to find the Gosnell trial eminently newsworthy. This is not about being "pro-choice" or "pro-life." It's about basic human rights.

The deafening silence of too much of the media, once a force for justice in America, is a disgrace.
Kirsten Powers is a member of USA TODAY's Board of Contributors, a Fox News political analyst and columnist for The Daily Beast.

In addition to its own editorials, USA TODAY publishes diverse opinions from outside writers, including our Board of Contributors.
Posted by Lovey at 2:11 AM No comments:

By Steve Skojec
It’s one of those things that makes you wonder just what they’re hoping to slip past us.
Thanks to the Archdiocese for the Military Service, USA, we now know that an Army Reserve training manual lists Catholicism along with other alleged examples of “Religious Extremism,” along with such groups as the Muslim Brotherhood, Al Quaeda, and Hamas. (Evangelical Christianity and Ultra-Orthodox Judaism also made the list.) And this isn’t just a rumor, it’s right there on slide #24.
According to the introductory slide of the training document:


The number of hate groups, extremists and anti‐govt organizations in the U.S. has continued to grow over the past three years, according to reports by the Southern Poverty Law Center. They increased to 1,018 in 2011, up from 1,002 in 2010 and 602 in 2000.
The striking rise is fueled by the superheated fears generated by economic dislocation, a proliferation of demonizing conspiracy theories, the changing racial make‐up of America and the prospect of 4 more years under a black president who many on the far right view as an enemy to their country.
The rise in hate crimes and extremism outside the military may be an indication of internal issues all services will have to face.

The Archdiocese for Military Service has called on the U.S. Defense Department to review the training manual.

The Archdiocese for the Military Services and Chaplain Alliance for Religious Liberty recently became aware of a U.S. Army Reserve Equal Opportunity training brief that expressly listed “Catholicism,” “Evangelical Christianity” and other religious groups as examples of “religious extremism” alongside groups such as “Al Qaeda”, “Hamas” and the “KKK.”The Archdiocese is astounded that Catholics were listed alongside groups that are, by their very mission and nature, violent and extremist.
According to an investigation and reply from the Army Chief of Chaplains office, the training in question appears to have been an isolated incident not condoned by the Department of the Army. The Archdiocese and the Chaplain Alliance explained that the Army can and should take steps to prevent such incidents in the future.The Archdiocese calls upon the Department of Defense to review these materials and to ensure that tax-payer funds are never again used to present blatantly anti-religious material to the men and women in uniform.

So I guess it’s all just a big misunderstanding, right?
I’m not buying that. Anyone who has ever worked on organizational communications knows how thoroughly things like this are scrutinized. Documentation gets reviewed, edited, reviewed some more before it’s ever released. To wind up on such a list means at some point, to the group of people responsible for this information, including Catholicism on the list seemed appropriate.
And by the description on the slide in question, you can see why:

Extremism is a complex phenomenon; it is defined as beliefs, attitudes, feelings, actions, or strategies of a character far removed from the “ordinary.” Because “ordinary” is subjective, no religious group would label itself extreme or its doctrine “extremism.” However, religious extremism is not limited to any single religion, ethnic group, or region of the world; every religion has some followers that believe that their beliefs, customs and traditions are the only “right way” and that all others are practicing their faith the “wrong way,” seeing and believing that their faith/religion superior to all others.

So, according to this definition, I can see why we’re included. Catholics do claim that they have the fullness of truth, and have always believed that (despite a great deal of nuance) “Outside the Church there is no salvation.” So there you have it. We’re extremists.
This isn’t the last time we’ll see something like this. Good for the Military Archdiocese for the catch, and good for the Army for backtracking. But as our faith and religious liberty continues to come under assault, don’t be surprised if Catholics — and our politically incorrect views on abortion, gay marriage, and more — wind up on lists like this over and over again.